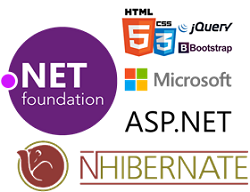 The is the base reusable implementation for an ASP.NET type tech stack.  ASP.NET is framework for building web apps and services with .NET and C#. The core features of the tech stack are: The Harbormaster ASP.NET tech stack contains the necessary templates and macros to generate a fully functional project complete user interface, business objects, and a data access layer to read and write from the database of choice. This tech stack assumes installation and usage of Visual Studio.

Along with what is supported by the parent tech stacks, the following are overridden and additional capabilities:

Only recent have the majority of CI vendors made Windows an option.  Adding full vendor CI support for ASP.NET applications is now in progress.  Until then, use the instructions below for integration into Visual Studio to allow it to build, test, and run the resulting application.

In Visual Studio, create an ASP.NET Core 2.0 project that the .NET Framework. (not the .NET Core). Be sure to name the project the same name as the application being generated

The following steps require the use of NuGet to package and publish the generated application files.

Assuming nuget is installed, issue the following command within the root directory of the generated application files:

NuGet tools require that sensitive operations are authenticated with the server using an apikey.

Next, NuGet requires the application be packaged:

This will create a file in the same directory with a .nupkg extension. This will push this file in the next step

Finally, the packaged application is ready to be pushed to a NuGet repository:

Use NuGet within Visual Studio to load the previously pushed application from the repository.

Clone the project from GitHub overwriting into the Visual Studio project normally located at:

Notice if Visual Studio auto-refreshes the project with the generated application files. If the project does not auto-refresh, force it to. If the files still do not appear, re-check they were copied into the correct directory.

Within Visual Studio, locate the hibernate.cfg.xml file, right-click it and assign Build Action to Embedded Resource and Copy to Output to Copy Always.

Build then run the project. Visual Studio will launch the app in the browser.